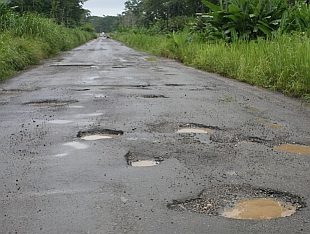 Some believe that purchasing or selling low quality bitumen also known as mixed bitumen can have catastrophic effects.
it has been sighted that certain bitumen suppliers use cheap stock-feed.  This type of stock-feed is mostly brought in from Iraq to produce their bitumen. This product does not meet international standards.  However, when initially tested the results too often are accurate.However,once the same material is retested at the destination too often  the results differ. It is believed that the reason for this occurrence is that most international inspection companies take bitumen samples from the top of the drum and not the bottom. Only an in-depth test can yield accurate results.  By filling low quality materials in the bottom of the drums which is not tested some bitumen suppliers are beating the testing standards.  During the voyage the two products are blended together causing a change in the specification of the bitumen.

Buying or selling mixed bitumen can have Catastrophic effects said the Honorable former President of Iran’s Oil Union OPEX in a bitumen conference held by Pasargad Oil. (the first international bitumen conference held on October 26th and 27th 2014) speaking only to to those which are selling mixed bitumen he said “when you sell low quality bitumen you are Dipping your bread into Blood” and then eating it. He added that as an outcome of poor road conditions many drivers and their families may be injured or have fatal accidents.

This is one more reason why purchasing low quality bitumen is not a suitable choice and it’s not worth the small saving.